Dear Runaways,
May I tell you a secret?

I still love you.

Gert. Nico. Karolina. Molly. Mighty Molly Hayes with your hat of awesome. I still love you. All of you. My beautiful, brilliant, bad-as-hell Runaways.

When I saw that the second round of the Women Write About Comics blog carnival was Favourite Stories Starring Women, I knew it had to be about you. In a way, my comics love begins and ends with you. There’s a dalliance with Ms Marvel, a lovely dalliance that primarily began and ended with (ohgodshehassuchlovelylovelyhair) but it comes back to you. My Runaways. Always.

You’re currently lost in limbo, abandoned somewhere between guest appearances and the dark corners of Hiatus-Land. But you were good, once. You were so damn good. 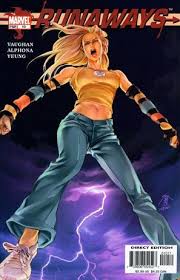 When the quirky girl discovered she could fly, when the youngest kid found out she was a super-strong mutant , the witch got her powers when she got cut (or had her period) and when the fat chick got her dinosaur, I knew I had my series. Simple as.

You never forget your first love.

This is what made comics brilliant to me. Your story, such a simple one, such an elegant hook of ‘parents truly are evil’, had me. (“They f*ck you up, your mum and dad / They may not mean it but they do / They fill you with the faults they had / And add some extra, just for you” – Larkin).

The representation of the female characters in Runaways blew me away. Still does.  I’m sorry, but I’ll be ignoring the covers and the subtle, and the none too subtle, moments of Gert-slimming, as these are just extraneous paratexts in my eyes. They’re not my story. Not today. Today is about you.

Forget vampires, forget time-travelling bad guys, forget duplicitous boy-crushes; these women were ultimately defined by each other. They weren’t defined by some big bad of the week or even by their clothing (there’s no typical superhero garb to be had here). They wore hippie-chic, casual-urban, or hipster-goth twists on street clothes. Practical yes, but still resolutely sharp, sexy and so viscerally teen (and oh! Molly’s hat!), Spandex and overtly superhero outfits were adult. They were symbols of the establishment that the Runaways had stepped away from. Superhero names were adopted, yes, but ultimately discarded or used in with wry humour at their arch metatextual nature.

This team did things their own way. And then … somehow … it all got a little lost.

The mad, glorious heights that the Runaways had scaled suddenly stopped. I love Whedon and I will do so forever but his issues of Runaways were stuttering. Short, sharp stutters in a series that had been previously so full of brilliance that they had made me gibber at Brian K Vaughan when I met him at a convention. I had meant to ask him to sign my issues in a nicely coherent manner, but instead I just went “BBeudhcCouldYouSignThesePleaseThankyouMurbeleBleh”

What went wrong, I think, lay in the shift of focus. It continued after the Whedon issues. It continued and became so awfully pronounced.  The Runaways (and I’m suddenly deeply aware of the irony here) began to fit in. These women became less. Just … less. Their differences, their strengths, their Gert – it was all gone.  It was diluted as the game-changing original issues were stretched far beyond the limits of credulity and believability. These teens needed to be lonely, brilliant, moody wanderers. These women didn’t fit in. The world of rules, of adulthood and responsibility, wasn’t theirs. They were teenagers; mad, confused, emotional teenagers living a sort of Kerouacian dream that I could never have dreamt of experiencing (but God, I wanted to read it so bad).

My Runaways never came back.

I stuck with the series through to the Immonen issues and to the eventual hiatus(ness…ness?) but it all fell flat. Flat and a little pat. This wasn’t the team I loved anymore. Though I adore Xavin, and Chase, and Victor, and Klara, (and in a different way, the machiavellian Alex)  none of them ever got to me as much as the original Nico-Karolina-Gert-Molly quartet.

These women were different. They had periods (periods! the realisation women had periods! I still can’t get over how revolutionary this was!). They worried about love. They had good days and bad days. They fought. They laughed. They lived. They remain one of the most inspirational groups of fictional women I’ve ever met. Shit happens. Shit of the shittiest kind happens, but you deal. You deal with it and you come through it and you come through it strong if you just have faith in who and what you are. You may be a screw-up, an abandoned kid, a runaway, but your power comes when you admit it. And the more … ‘corporate’ … the Runaways became, the more I lost the original heart of this team that had captured me whole.

And, as for the bad times, I’ll paraphrase a certain Joss Whedon.  The biggest threat to the Runaways was the world – both inside the narrative and outside of it. The hardest thing that the Runways ever had to do was to live in it.

all images are copyright: marvel comics

6 thoughts on “Runaways (a love letter)”