Kevin Brooks stormed onto the scene right from day one. Martyn Pig, his debut novel, sparks with a gritty urgency and intense realism that proves Brooks is no one hit wonder.

The eponymous Martyn Pig is a teenager caught in hideous circumstances. His father is a drunk and his mother’s long since quit the scene. And then something very awful happens that turns Martyn’s world upside down and throws him into a series of disturbing events that rapidly spiral out of control and affect everybody he knows and loves.

Martyn Pig is a sharp, dark and incredibly tense thriller. When this story zigzags, it Zigzags. Uppercase. It ramps up the tension and does so in language that remains precise, bold and, in certain moments, an incredible poignancy.

What’s perhaps most appealing is that Brooks holds off from making emotional judgements. He doesn’t write people as good or as bad. He writes them in shades and, as a result, his characters shine with a vitality that lives far beyond the page. Martyn himself is almost palpable. Even during the more violent moments in the novel, Martyn comes across in that sort of grey area. You don’t know whether to root for him or to be disgusted by what he’s done – and that sort of uncertainty, that sort of fragile breathless reading, makes for one hell of an experience. 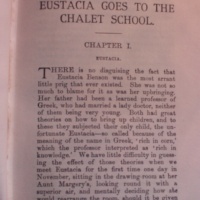