The Little Bird by Dick Bruna

So. Dick Bruna. My beloved god of felt-tip pen bluntness, and vivid colour. Is it too hyperbolic to say that this moved me to tears at the end of it? I think maybe, it is, and yet, it did. So it stands.

Bruna is probably best known, and justly so, for his work with Miffy. But Miffy isn’t the entirety of his creative output. The Little Bird is a stand alone story of 24 page. Every verso (left) page has four simple lines of text, being accompanied on the recto (right) page with an illustration.

The little bird is on a journey, looking for somewhere to build her nest. She engages in a question and answer dialogue with a variety of characters – a puppy, the farmer, the farmer’s wife, a cow, a sunflower and so on. Ultimately after she searches the entire farm, the little bird ends up “building her nest in a secret place / where nobody would ever find it.”

It’s a simple, bordering on tragic story. Truly. It’s got echoes of the nativity at points (no room at the inn), and I found the ending, when the bird eventually flies away, an incredibly sad moment. The thing about books like this is that they sing, they sing much greater than their apparent ‘smallness’. Bruna’s a master at this, addressing world-shifting themes in the smallest of books. His Dear grandma bunny is perhaps the best rumination on grief that I have ever read.

And what of the noted Bruna style? It is present, so very present in this book. The simple, and yet exuberant images rest comfortably in their one page frame. But there’s, as always, something very clever in his work. The opening spread shows the bird with her beak pointing towards the centre of the book. The final image is of the bird flying away, her beak pointing at the outer edge of the top right hand page. The bird maps the story visually, without even viewing the text.

I often think that the younger you go in picture books, the more complex and clever you have to be. And sometimes it is the moments that look the simplest that are the ones that are the fullest of clever, brave, and good writing. I love you Dick Bruna, I really really do. 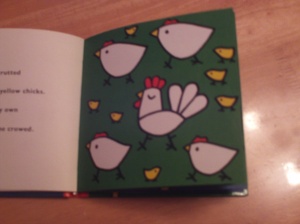 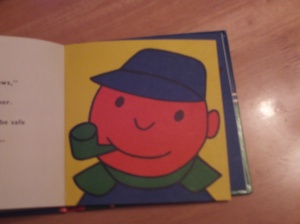 One thought on “The Little Bird : Dick Bruna”