How children distinguish fantasy from reality

I’m so pleased to share with you an interview with Allán Laville, a doctoral researcher based at the University of Reading, who very kindly let me talk to him about his work. (And oh guys, his work is fascinating and bears a WORLD of relevance for how we look at children’s literature – particularly when thinking about how very young children read and interpret texts). I hope you enjoy the interview! I’m really keen to hear from you what you think about this so please feel free to comment / tweet / email me 🙂

Did you ever stop to think: Hi Allán! Could you briefly describe for us your research and what you’ve learnt from it?

Allán: Our research is concerned with the investigation of how 3-8-year-old children distinguish between reality and fantasy. The current study looks at how children categorise make-believe characters into either real or make-believe. We were particularly interested in how children categorise heroes and villains and how these characters made the children feel. We found that 3-6-year-old children were much more likely to say heroes are real and villains are make-believe. We also asked the children, why did you say a character (e.g., Peter Pan) is real? We found that many of the 3-6-year-old children would say a hero character is real because they liked them and therefore we can infer, were happy for the character to exist. The opposite was found for Villians e.g., Captain Hook is made up because he is mean to people.

Did you ever stop to think: Your testing focuses on classifying characters from TV. I’m interested in the potential of this research if it were applied to something like a picture book or an app. Do you think you’d find similar results?

Did you ever stop to think: I was really interested in the notion of emotion being involved in the fantasy-reality judgement. Do you have any ideas how parents / teachers can support children and understand what they’re going through this stage of development?

Allán: Another good question! Firstly, I think it is important for parents and teachers to be aware of how emotions can influence children’s fantasy-reality judgments. Other research has found that 3-5-year-old children are much more likely to believe in positive make-believe events compared to negative make-believe events. This is interesting as it gives us insight into a young child’s mind i.e., only positive people and events can exist in the real world. In addition to these points, parents and teachers should be aware of how children use emotion to make decisions as well as their belief in new information. For example, recent research has shown that children are more likely to believe in information from a nice person (who is not an expert) compared to an expert who has nasty characteristics. Therefore, the information children believe in might be based on how they feel about the speaker (i.e., parent or teacher).

Did you ever stop to think: You’ve worked with children ranging from 3-8 years old, so from emergent literate through to literate. What were the main differences between the groups with their reactions to the images? Did you find out anything that surprised you?

Allán: When testing the older children in our study (7-8-year-old), we found that their justifications for whether a character is real or make-believe was based on their knowledge of reality as well as their knowledge of the character’s world of existence (e.g., Neverland). In the younger children, justifications were based on how the character made them feel as well as looser frames of reference. For example, one 4-year-old child commented that all characters were real as they watched them on TV at their Grandma’s house!

Did you ever stop to think:  And finally, what’s your favourite children’s book? 🙂

Allán: Ah! It would have to be Charlie and the Chocolate Factory by Roald Dahl!

Did you ever stop to think: Thank you Allán! I’ve found it fascinating to see just how different our perceptions of fantasy and reality are at a young age. I think it’s so relevant for teachers, authors and parents – anybody who’s interested in how children interpret things – to find out more about this area.   Thank you so much for your time! 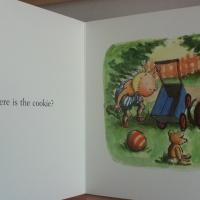