Hello! How was your Christmas? I hope you had a lovely few days and are enjoying the weirdness of ‘That Bit Between Christmas and New Year Where Everybody Doesn’t Quite Know What To Do With Themselves’.

I thought I’d share with you an update of what I’ve been working on over the past few months and in the process show you a little bit of my book. Do excuse me if I call it ‘my book’ rather than the actual title. The title it has at present is a working title which may change and if it doesn’t, then, it’ll be a cool little shenanigan to share in the future with you all. (As a special treat, you can try to predict how many exclamation marks I will use in that post!).

The big thing that I’m doing with my book at the moment is editing it. Editing is something that you all probably know and understand as part of your own life either at school, at work or with your kids. It is, to be very simplistic, the bit where you have something and you start to make it better.

My editing process is based around the terms: thick and thin, and firstly I think need to tell you what thick and thin means when we look at a story. Here’s an example (and do note, my book isn’t about any of what follows, for it is an example wotcha geeza innit): The girl walked into the cave and found the treasure chest. Now, that, as it stands, is thin. It’s spectacularly thin. It’s a sentence which does nothing other than join the sentence before it to the sentence after it. It is words that connect the dots. It doesn’t tell me anything about the girl or the cave or the treasure chest (which  I’ve called ‘the treasure chest’ instead of ‘a treasure chest’ which suggests the treasure chest is the destination of the story), and it doesn’t do anything other than fill up space and get me from one point to the next.

And that’s okay in a first draft. Sometimes it’s more important to keep going and thicken the story on the second pass at it. You can have these sorts of moments as long as you come back to them and make them earn their keep.

So I’ve come back to that sentence about the treasure chest and I want to change it. The first thing to do is to understand the state of the story at that point. Maybe the quest to find the treasure chest is being told by the girl’s grandmother who’s all “Ohhhh this quest is so hard, you’ll be eaten by dragons and zorsacorns*” and the kid’s all “er, I just got it, get a grip yeah?”. So it may be that a bit of thinness in the story is what’s required at this moment to undercut the histrionics of her gran. Think of a piece of music. There’s light and shade in it, delicate moments and powerful, heart-stirring moments in it. That’s what I’m aiming for. A book that can pull you in and make you breathe with it.

The second thing that I need to do is to take the text out of where I’ve been working with it. I need to be able to look at the words objectively and sometimes that’s not possible if I’m editing on a laptop that I’ve been writing it on. I print out the book and do a paper edit, working through every page (double line spacing is your friend) and pulling it to shreds. I doodle, I draw and I write on it with felt tips and pens of every colour. I make that manuscript something lived in and something that I know I’ve considered every word in**.

And the other thing I do is I abandon it entirely and pick up a different something. In the case of Unnamed Book With A Working Title it’s been paint. I doodle, I paint, and it helps me to start figuring out the heart of my story. The big moments. The, if I was making a film of it, DVD front cover moments.

(And here’s one I made earlier with an actual, almost maybe staying in the story but definitely sorting out those commas sentence!) 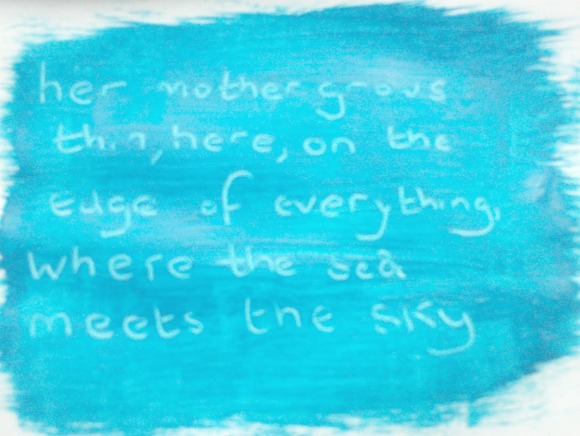 ** It takes FOREVER but it’s proper worth it.

5 replies on “Editing, reshaping and a sneak peek of things to come”

I’m trying to monitor my use of the word exciting – but it so is! 😀

You are so right about the value of printing out and reading differently. And taking a breather and leaving some space between you and the ms. before working on it again (lucky if your deadline leaves you time!) AND about it taking for ever but being worth it. Definitely.Good luck!

[…] did that, which you should, of course, maybe more than once. (There’s a good blogpost about that here.) No book is ever going to be perfect, especially to its author (be very wary if you think yours […]