Have you ever wondered why the moon shines in the night-time sky?

There’s something to be said about the idea of grace in picture books. It’s an airy idea to grasp, particularly when rendered in the flatness of paper and print, but it’s something that, in the best picture boos, is most definitely present. Moon is very much that; it’s a delight. Airy, magical, and graceful , it moves around the world, tracing a series of night time scenes set under a silvery waxing, waning and full moon.

And it is graceful, because it’s such a restrained book. The palette is one of shadows, of muted and restricted colours, greens and blues and blacks, a landscape lit up under the light of the moon, and then a sudden flare of colour. There’s a scene that I love, amongst many, where the moon looks down at penguins, and there’s so much life on the page, that even though the palette is carefully, beautifully, modulated, the spread sings. Do you see what I mean about that idea of grace? The balance here between the pattern of the penguins, that downward shift of the land, and the remote, precise, glory of that slender moon. It’s an eloquent spread precisely because of that balance; so genuine, so gently done. 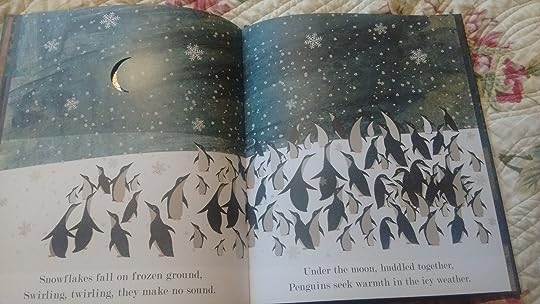 One of the other notable elements of this book is the use of cut outs. The moon itself  is a cut out space in the page which varies as you read through the book, ultimately moving through a full lunar cycle. It’s subtle work, and manages to move the book into something where you don’t just turn the pages, you go back and forth, loooking at the moon that was and the moon that shall be. I get fulsome about books like this (I know, surprise!) but that’s because they do what they do so well and picture books build readers, and this book burns to be read under the light of a full moon at bedtime. 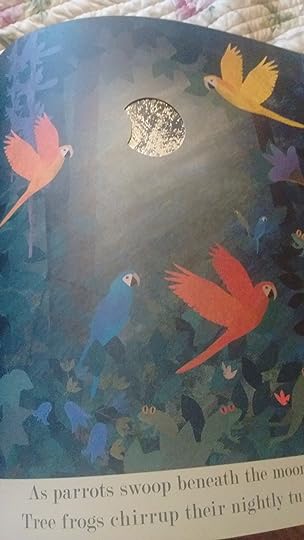 This edition is due out on September 7th, and I’m telling you about it now because I think it’s one to get on pre-order, and into your budgetary / lesson / teaching plans. I also think it would be an utter delight for anyone going on a camping holiday, or anybody who’s a little bit afraid of the dark. Where Moon shines (badumtish) is in how it creates this sense of connection; the moon itself may appear slightly differently to everyone but it is the same moon. We’re all on the same planet and oh, isn’t it beautiful. 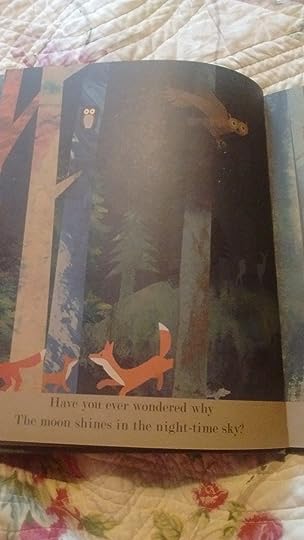 My thanks to Little Tiger for the review copy. Yes, I screamed a little over-excitedly when I got it.